A tiny slice of my life

This is a look at my life, and the many things I try to learn and do. 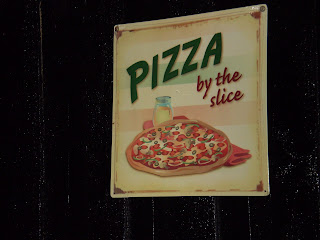 Now last night Mr CLI came home late from work and as he had such an out of the ordinary day the day before, I hadn't cooked anything for tea as I knew that he would be a bit fussy about what he ate.

I was right my 2 suggestions for tea got the thumbs done. So what would you like I asked, after much thinking he suggested we go to Alex's for pizza.


Alex's is in Koroit about 15 minutes drive from Warrnambool.

Now I must admit I haven't tried the Thai food yet, whenever we go I am always tempted by the pizzas.

Last year Mr CLI, Miss Fish, Miss Le Coiffure and I went there for my birthday it was the first time I had been, well we thoroughly enjoyed it. So when we can we go back there.

Last night we had intended to get take away, which you can eat there at a table inside the shop or at tables set up outside, but as we live quite a distance away the pizzas would have been cold and soggy by the time we got home, so we ate in.

Now the prices for the sit down menu is only a couple of dollars more than the take away price.

Last nights bill for 2 large pizzas, I bought half of mine home + 2 x 600ml bottles of coke + I had  a dessert which was meant to be exotic Thai fruits with ice cream , but was actually lychee's, which I actually quite like. = $50.50

Now on the restaurant side you have a area in the front that has hardwood floors chairs and tables with white linen table cloths, then you go down a hallway and enter and area which actually is the back of the 2 shops which have been enclosed, here you have white plastic chairs and black tablecloths and in winter a combustion heater, then you go into the next area which is called "the shed" and this is actually what is is a big shed running the width of the 2 buildings, it also has a combustion heater and a bar.

This are seems to be used for large parties and if you go on a Thursday night in winter the local footy team will be there for an after training meal.

Now the menu isn't expensive the pizzas range from $10.50 - $18.50. There are stuffed potatoes, Thai food incl rice dishes, noodle dishes, stirfrys and curries. Also you can get standard fare like chicken parmigiana and steaks. 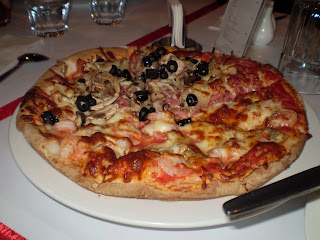 One of the pizzas on a thick base you can ask for a thin base if you wish. Which is my preference the thin base is wafer thin and crispy. 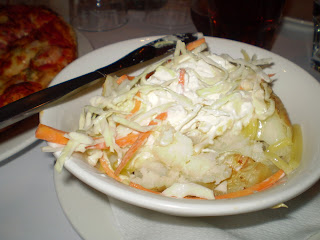 A potato with cheese, sour cream and coleslaw.


For desserts the was sticky date pudding, pecan pudding & chocolate fudge brownie all served with ice cream for $7.50 or chocolate self sauce pudding and ice cream for $6.50, then for $5.50 you have 3 Thai desserts the one I had or rambutans and Ice Cream or what I had for my birthday last year which was sliced banana with hot coconut milk poured over and a sauce made from palm sugar.

I must say I was a bit surprised when I received it because there isn't any mention of it being hot on the menu, so it came as a bit of a shock. After my mouth recovered from the hot liquid I did enjoy it.

So if you are ever in the area give Alex's a try, I would be very surprised if the food disappoints you.
Posted by jennyg at 8:49 AM

Email ThisBlogThis!Share to TwitterShare to FacebookShare to Pinterest
Labels: Places to go, restaurants